I grew up in Indiana, so I’m no stranger to tornado weather. The secretary at the elementary school I attended used to run through the building blowing a whistle as loudly as possible during severe weather to alert us of impending doom. Then, of course, everyone hurried to the lower levels of the building and assumed The Tornado Crouch: kneeling with hands on the back of the neck, fingers intertwined, face inches from the floor. If you grew up in the midwest, you know the drill. Most of those tornado scares amounted to just a lot of sitting on the floor in near silence listening for the sound of a freight train (whatever that sounds like!). For the most part, life went on pretty much as usual. It sometimes felt like the weathermen overreacted.

OK, the school secretary did NOT look this young and beautiful, but she might have had this expression when she ordered us all downstairs for the tornado drills.

But then we noticed something. We noticed that when the weatherman predicted thunderstorms, things like youth group events and church meetings got cancelled. We saw our neighbors scurry home to beat the weather, and we started thinking that if the native Nebraskans were worried, maybe we should be, too.

This was taken in Omaha, just north of where we live. Looks like something from the Left Behind series.

Then yesterday the weather service predicted severe thunderstorms: the kind that produce tornados. We heard that planes at the nearby Air Force base evacuated to other states in anticipation of the storm and that those working on base were sent home “to prepare”. Pictures of radars and storm clouds popped up all over social media.

We are at the bottom of the yellow box, near Omaha. The weather guy said they describe these storms as train cars because one rolls in just as the last storm cell rolls out.

We holed ourselves up in the basement and watched Madagascar. We wanted to watch Twister, but our internet did not cooperate.

We did what good Nebraskans should do. We cancelled piano lessons and ordered a pizza. Oh, and we invited friends who don’t have a basement over to share the pizza and have the first ever in the history of our family Storm Party.

At about 11 pm, our guests and I crept outside to look at the storm. From the shelter of the back porch, we watched lighting streak across the whole sky. Thunder boomed, and rain poured. We looked at the trees, though, and realized that there was no wind at all. Just a regular thunderstorm. We went to bed.

This is the parking lot at work. No, it’s not normally that dark and brooding!

In the morning, I woke and realized we made it through the night fine. Our neighborhood sustained no damage at all. I saw no downed limbs or fallen trees. No power outages. Just life as usual. I started to think the weathermen overreact everywhere, but then I saw pictures from North Omaha and a town called Blair just about 45 minutes northeast of Omaha. 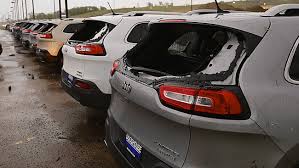 Might be a good time to buy a new car if you live in Blair. That is, as long as you don’t mind a few dings here and there. Or maybe a broken window. 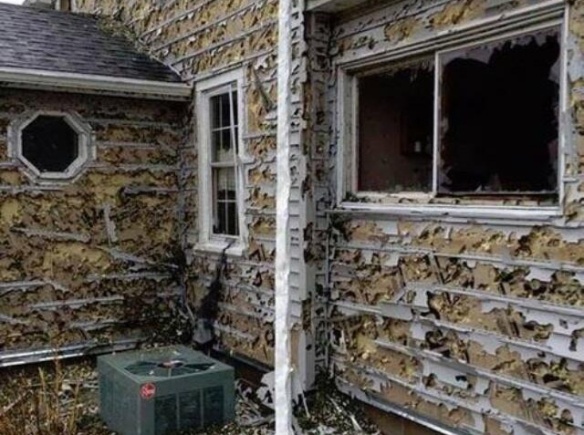 Looks like maybe this house in Blair saw some hail last night…you know, just a little.

I guess when it comes down to it, a few miles can make all the difference! At this point, I’ve decided that following the lead of the neighbors and listening to the weather report may be a good idea. Even though this damage happened about an hour from our house, it could have easily been us. Thank goodness the most excitement we saw was when the pizza man arrived!