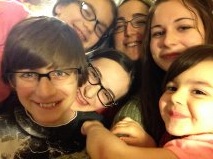 I left home at eighteen when I moved to Tennessee for college. After graduation, I headed straight to Ukraine to teach for five years, and after that, Cincinnati. Now we’re living in Nebraska, so I’m nowhere close to my home state of Indiana. I can’t say I’ve actually missed it much. Not that Indiana’s not a great place because I liked it fine enough. I’ve just noticed a phenomenon that occurs in each place where I live. Even though we left behind our families long ago, we have seen met people who became like family to us in every location.

In Matthew 19:29 Jesus says, “Everyone who has left houses or brothers or sister or father or mother or children or fields for my sake will receive a hundred times as much…” This has definitely proven true for us, a fact that I see more and more in our relatively new home state of Nebraska.

The main campus of our church, Calvary Christian Church

When we moved here, we only knew a few people here, and we knew them just barely. We began attending a huge church. We loved the music and the professional feel of the worship services, and we loved the preaching as well. However, it quickly became clear how difficult it could be to make friends in a church of 1,700. We hardly saw the same people twice in a row, and those we did see already had lives and friends and plenty of stuff going on to keep them from taking on newcomers. That’s not to say they weren’t welcoming. It was actually at one of the meetings for new people that the church set up that we met our new “family.”

Andrew went to the meeting because I stayed home with the kids. He came home uncharacteristically excited about some new people he met (he’s an introvert–see the previous post about how he feels at parties and the like!). He invited them to our house, and somehow we decided to start a new small group together. I’m not sure how this all happened because we have traditionally balked some at such endeavors, us being introverts and needing our space and all, but the timing was right for everyone. They had just moved to this area and needed friends as well. We all have the unique perspective of outsiders looking at the culture of the region from a newcomer’s viewpoint, so we could all talk freely about our experiences here without worrying about stepping on a native’s feet.

Since that day, we have done so much fun stuff together. I mean, seriously, a lot of stuff. Stuff people sometimes do with family. Here are some pictures of us all together, doing fun stuff:

Hayride at the pumpkin patch

And then we had a pumpkin carving party on our back porch.

We all dressed up for Halloween.

We’ve celebrated quite a few birthdays together… 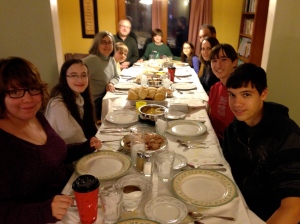 Two Thanksgivings and Christmases, some even with their extended families. 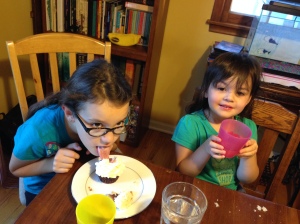 We’ve eaten a LOT of food together.

We got to spend a fantastic day at the air show with up front “seats” since we have connections in the Air Force! (Tip: Never wear jeans to the air show in the middle of a Nebraska summer, and if you do, never fall asleep on a blanket while watching it. A lot of so-called “friends” will take your picture and text it to you and to each other!)

The value of our new family away from family became clearer this Christmas break. Most of the group has been out of town because the guys are all in the Air Force and have been deployed. Their wives have been scattered all over visiting family while they’re gone, so we were left with just our family and two of the guys who couldn’t get enough time off to travel. We invited them over to spend the night on Christmas eve. They got up with us and watched the kids open presents, ate breakfast, and lounged around the house with us all day, just like part of the family. And guess what! It was totally comfortable and fun! I sometimes feel sorry for my kids not growing up around aunts and uncles and cousins, but I see in this family away from family that God has provided more aunts and uncles for them, and he even gave them a cute little cousin!

I’ve learned a lot from this group:

So here’s to leaving home and stepping away, to letting God provide the relationships we need. Here’s to taking God at his word and trusting that he will give us the family we need when we need it!