I’ve been in storms, but tonight…this storm beats them all. The two oldest kids had a band performance scheduled for 7:30, so we made our way over to the stadium where we were supposed to watch it. By the time we got there, it was raining a little, and they had cancelled the performance. Andrew and I decided to wait in the car until the kids finished practice. We had books, as all good nerds do, so we were completely satisfied just to sit there and read.

We’d been sitting in the car about 20-30 minutes when the sky got really dark. The rain started pouring, and the wind picked up. I called Hannah to tell her not to come outside, and at about the same moment she picked up the phone, the wind got so bad that I basically yelled “Stay inside! Don’t come outside!” and hung up. Andrew told me to get out and run inside. Forgetting all about the running car, he got out. I reached over and turned it off and we started running into the building.

The tornado sirens were so loud! I’ve never heard them up close like that. I guess their close proximity combined with the extreme wind made me think the sirens were instead a tornado (you know how they always say tornadoes sound like a train?! I guess tornado sirens do, too!). I kept yelling, “That’s an actual tornado!” a fact that probably freaked out my southern-born husband.

About halfway into the building, the wind blew me so hard from behind that I actually felt my feet start to leave the ground a little! Before I knew it, I was lying on the wet grass! I looked over, and Andrew was, too! We managed to get to our feet, despite the extreme wind pushing us from behind, and scramble the rest of the way into the building, holding onto each other the whole way, just in case.

I looked at Andrew when we got into the high school. He had no glasses on his face! I thought to myself, Whew! I’m glad I still have my glasses…wait a minute…why can’t I see anything? I lost mine too! The wind blew us down AND blew the glasses off our faces!!

Andrew and me, alive but still lacking spectacles!

We hurried down the hall to the band room to find our kids. We managed to find them, found a safe hall to sit in, and waited out the storm with all of their bandmates. I was afraid we’d have to get Hannah to drive us home because neither Andrew nor I had our glasses, but we actually managed to find both pairs on our way out. In the grass, not far from where we fell. Along with the keys to my office, which, hey, I didn’t even know I’d lost!

I could spend some paragraphs comparing storms to problems in our lives and how God works it all out and yada yada yada. I’m not doing that. I’m sure you can figure it out yourselves. What I will say is in a moment like that what I wanted most of all was to find our two kids. Once we found them and saw them safe, I just felt extreme relief that kid #3 was in Hawaii with my mom and sister and not home alone or something! Oh my! At least she was safe! And when it was all said and done, when we drove home, we saw the downed trees and branches and neighbors spilling out onto the street and I suddenly felt such an appreciation for the people in our life. We’re safe and dry, and we even saw a nice rainbow on the way home!

I’m visiting my sister in Hawaii this week. Yes, I know. It’s a hard job, but someone has to do it. You know, beaches, beautiful sunsets, warm weather. We ate dinner outside last night, and no mosquitoes attacked us, no prairie wind blew our dinner off the table, and we did not even have on jackets.

How interesting that the beautiful lamp silhouette appears just in front of the sun.

But I hate to unload my troubles on you.

Besides the heavenly surroundings, I get to be with my sister. Until this trip, I hadn’t seen her since she and her husband moved away from the midwest about three or four years ago. It seems like a lot longer than that, since my kids were just little things when they left and now they’re getting ready for being teenagers, but I guess it was just a few years ago.

At the beach, in case you didn’t notice.

I’m blessed with a good relationship with my sister, which is interesting to me because I can’t say I’ve had the very best relationship with the rest of my family all of these years. My sister and I never really argue about stuff. We did some when we were little, and I remember an epic battle when we were teenagers. It had to do with a fan that she kept pointing at me, even though I said I didn’t want it pointing at me and moved it away every time she moved it toward me. (I only fight over really important stuff like that.) Full of rage, I saw her impossibly large, 80’s-teased-out, curly hair and impulsively grabbed a handful of it and pulled. She rose from the couch in painful indignation and ripped out half my bangs. I mean, I heard those babies screaming as their follicles left my head.

At that moment, I knew that I had made a terrible mistake. Although she is younger than I am, my sister has always been a force to be reckoned with physically. I have always been able to reason my way to winning just about every argument, but if it ever comes to a knock-down-drag-out with her, I am destined to lose, lose, lose. And in a way that I will probably never forget. Like the time she punched me in the stomach and knocked the breath out of me or the time she grabbed both of my arms and wrestled me to the ground. Yep, I think twice before I tangle with her physically, especially now that she’s a personal trainer and I’m an overweight, middle-aged mom who would rather sit at her computer than run a mile.

That last big fight over the fan ended with her chasing me to my parents’ room and me waking them up to beg for protection, which is what I usually did, being the tattletale oldest who could probably make anything look like the other’s fault (sorry, Emily!).

So we get along pretty well and have come to the comfortable place where we don’t really bring up things that I can verbally bash her in or things that she can send me to the ER about. Instead, we like to make fun of things. That was one of the things we were both looking forward to doing when I came here, and I yesterday we started the fun.

It was morning, and I saw their coffeemaker and told her how I have thought about getting a Keurig machine. I don’t really drink enough coffee to make a full pot of it, so it seems like a waste of time to get out all of the stuff to make coffee. Seems like it would be easier just to pop one of those little thingies into the machine and make one cup. She said she didn’t drink coffee, and I said I don’t like coffee, but I drink it because if I don’t drink it I’m going to want to drink Mt. Dew.

There, I said it. In the morning, first thing, I will pour a cup of super-healthy Mt. Dew if I can. Before I even think about it, I will grab that 2 liter and swallow down enough calories for a meal. Now that I’m on a health kick and at least trying not to consume a week’s worth of calories in one cup, I’ve cut back on Mt. Dew and all soft drinks. Instead I drink a little bit of coffee in the morning, just so I can have something different and not boring, like water.

The bad thing is that at work people make coffee because they like the caffeine, and I really do not want the caffeine. I would rather have decaf, and I would love it if I could find caffeine-free Mt. Dew in the stores. Unfortunately, it is as rare as a snowball on the Hawaiin beach.

This led to our discussion: what if people talked about soft drinks the way they talk about coffee. Every morning, I read my newsfeed and find all kinds of memes about coffee and how people can’t live without it. When you put it in a different context, you can see how strange it is. What if the newsfeed were clogged with memes about drinking soft drinks early in the morning? 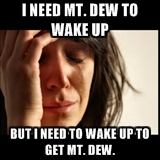 It seems odd to me that so many places offer free coffee now. Churches hand it out, my daughter’s orthodontist supplies it, our bank gives it to customers. Why is coffee such an acceptable thing to hand to people, but nobody offers a free Coke to every person who enters. Now that the Keurig machine has made it easier to make a single cup, it seems even more places offer it, but don’t tell me it’s because it’s cheaper than a soft drink. Those little Keurig things cost money, too.