One of the benefits of marrying a missions professor is spending some of my days off going to cultural events and different places of worship. In other words, putting myself in situations that might be less-than-comfortable for me. I grew up with a passion for missions and spent the first five years of my adulthood overseas. Despite that, I feel reluctant to go to Chinese New Year’s celebrations or churches where everyone speaks a different language. According to personality tests, I’ve supposedly shed my previous introversion and become an extrovert over the years, but somehow the idea of stepping into a situation where I’m clearly not part of The In Crowd makes me uneasy. 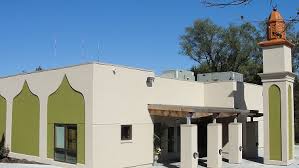 So yesterday morning when Andrew asked me if I’d like to go to the mosque for a lecture on Islamophobia in schools and colleges, I can’t say I felt joy in my heart. However, I like it when he expresses interest in the things that interest me. If I want him to put forth effort to participate in my things, I should participate in his, right? Plus, I admire his passion for creating relationships between Christians and Muslims. I can’t stand that a loud element in our society seems to have taken a turn for the medieval in rejecting out of hand anyone who differs from them. So I agreed to go.

When I lived in Ukraine, I could walk down the street and pick out Americans. Even when they managed to curb their talking and laughing in public, which was rare since we are a boisterous bunch, they often wore things they thought made them look Ukrainian but really served more as a big red flag identifying them as foreigners. More often than not, they picked up a big, furry hat with earflaps and donned that thing, thinking they looked Russian or Ukrainian when actually they looked ridiculous.

That’s how I felt when I wrapped a scarf around my head to go into the mosque yesterday. Muslim women look beautiful wearing a hijab. I felt like a matryoshka doll in my ill-fitted scarf. I felt sure I’d stand out and knew they’d take one look at me and think hmmm… that poor woman needs help putting on that scarf. Which they probably did. 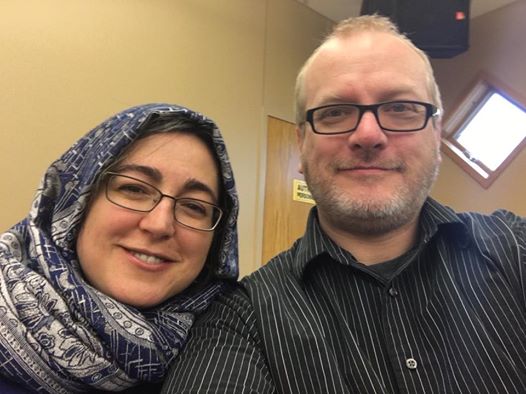 Don’t deny it. You wouldn’t be surprised if you found little scarf-clad mini me’s running around; I look like like a Russian nesting doll!

We ended up being only the second ones there. A woman waited with her children in the foyer, and she took me on a little tour. She showed me the bathroom where the women perform ceremonial washing before prayers. She took me into the room where the women stay during the prayer service. She was friendly and nice, just as I would be to a newcomer to my church. When she dropped me off back with my husband, we went on into the main hall, where women can go when it’s not an official prayer service.

Stepping out of my comfort zone and into something different pointed out some things about myself that I think I’ve denied for a long time. I’ve been to a mosque several times before, so I’m not sure why this one was different. Maybe I am just ready to think about those things now. Whatever the case, here’s what I learned.

I have a big hang up with gender inequality. That’s not news. This is something that has been coming up regularly in my life in the last few years. Andrew has acquaintances at the mosque since he’s made an effort to get to know them. When he introduced us, I noticed the lack of eye contact with me. Since I am a woman, Muslim men don’t make eye contact, shake hands, or speak much to me. They indicated that I should sit at the back of the room. As children filtered into the program and took their seats, the girls sat in the rows around me. Boys sat in the front. Later I asked my youngest daughter how she’d feel if she and the other girls had to sit in the back and the boys in the front of the classroom, and she said, “I’d feel like I wasn’t important.”

When Andrew and I discussed it on the way home, he said that they avoid eye contact because speaking much to me or looking at me would be considered flirtatious and would be disrespectful to me and to him as my husband. The woman who showed me the women’s area explained, “This is the area where women sit. It’s much more comfortable this way because we can sit however we want and not worry about what the men think.” To them, this is respectful.  To me, it feels disrespectful. That’s just one example of how people from different cultures can misunderstand one another’s good intentions.

Watching how the speaker presented his material and how the audience responded, I realized how people outside the church see Christians. Hearing his explanations for why Muslim women wear a hijab or why muslim men grow beards, I couldn’t help but think that’s how non-Christian people see Christians when they try to explain how to dress modestly or how to ask someone to church. It was so similar, a fact that leads me to my next point.

While we do have many differences in our beliefs and religions, we have a lot of similarities. He spoke about Mohammed and stories from the Qu’ran that I’ve never heard (since I have spent no time at all studying Islam), but he also talked about Abraham and Moses, David and Jesus. He urged the children to be good students and to be kind and helpful to the teachers and other students at school. He talked about living a life devoted to God, respecting our elders, caring for those who experience social injustices or poverty. All of these things are things we have in common.

Most of all what stood out to me is a sense of intense shame that these children had to learn how to deal with people in their schools who treat them badly because of their religion or the color of their skin or their accents. No children should ever have to learn how to deal with people bullying them for those things. That lecture should have been irrelevant, but when the speaker asked for examples of times the children in the audience have been mistreated or shamed because of their faith, many of them raised their hands and shared their experiences of others teasing them for their religion or saying violent things about Muslims. This isn’t something one weird kid has lived through. This is a regular occurrence for some of them.

As a parent, this appalls me. When have my innocent children ever had to sit in a class teaching them what to do when they’re persecuted for their faith? Never. And add to that shame the fact that many of the people who perpetrate these bullying acts do so in the name of Christ. This is something that makes my discomfort over wearing a head covering or sitting in the back row seem petty and irrelevant. 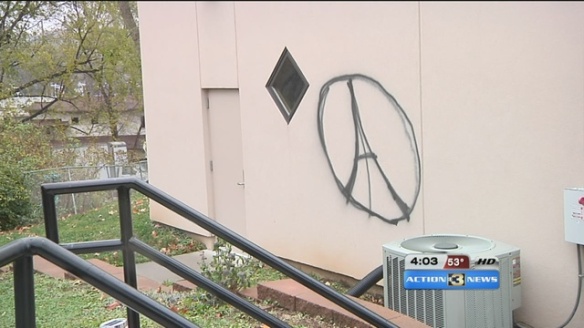 The Islamic Center after a vandal sprayed graffiti on the wall last fall after the bombing in Paris. For more info on this, click here.

When I stepped outside after this experience, I pulled the scarf off my head and headed to the car. The spring air felt cool and fresh. I looked forward to getting home and getting into my normal Saturday routine. I couldn’t help but think about how I could slide that scarf off my head and slip right back into being one of the crowd, but the kids in that audience, the woman I spoke with, the man presenting the lecture cannot do that. They stand out no matter what because of the color of their skin, their accents, their clothing. They don’t have the luxury of fading into the background. They must learn to live with the feeling of otherness.

I’m glad I went. I’m glad I was uncomfortable. I wish we could all feel uncomfortable once in a while on a Saturday morning so we could develop compassion for those who live their lives in that tension.

1 thought on “At the Mosque”