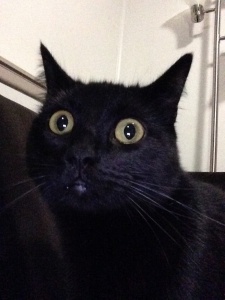 Nobody make any sudden moves. The whole place is about to blow to smithereens!

“When it rains, it pours.” “Bad things happen in threes” (or fours or fives, at times). We’ve heard the old proverbs before. Old sayings are said for a reason. It seems that way too often they’re true.

Last week those two proverbs proved true in our house, at least. It all started one night when Hannah noticed the cat doing his business on the dog’s bed. She shooed him off, but then he went to another spot and tried to do the same. This was a first for him, so we didn’t know what to do. We locked him and his sister in the laundry room with the litter box and cleaned up the mess. Then I went on an errand.

I was only gone for an hour at the most, and when I returned I expected to open the door to a quiet house with children sleeping and Andrew reading or sleeping or doing something else peaceful. Instead the front door swung open, and Emma stood in the entrance.

“What are you doing up this late?” I asked.

“While you were gone, we tried to get the cats back in the laundry room. I carried Smokey down, and she clawed my stomach and tried to bite me because she didn’t want to go into the room with the water.”

“Water? What water?” I asked. I mean, it’s just a laundry room, not an indoor pool. Although that would be nice…

This was not what I wanted to hear. Water on the laundry room floor means one of two things: the pipes to and from the washing machine broke or the main line backed up. Neither one of those sounded good at all.

Turns out, the main line chose that night to get clogged with tree roots, and since I’m in charge of laundry and wasn’t home, no one noticed that water covered the floor until the cats put up a fuss and somehow escaped. So our laundry room floor, which some brilliant former owner thought to cover with carpet (?!?) became a spongy, stinky mess.

The next morning, Andrew called the plumber. After he did his thing and sewage no longer flowed into our house instead of out of it, we were left with a smelly mess downstairs and a nice plumbing bill. Enter Stanley Steemer, who graciously cleaned up our mess…for a fee, of course.

At the same time that the plumber was working in the basement, the oven chose to go out. It had been dying slowly since last summer, but it must have thought, “Hey, if everyone else is freaking out, I will, too!” and gave up the ghost. The next morning, Emma sat on my lap and cried that she couldn’t see the board in class and her glasses weren’t working anymore.

I called the eye doctor, we went oven shopping, and we thought all was well. The salesguy even surprised us by saying the oven we chose was 15% off, so we felt happy to get a deal on it. The happiness didn’t last long, though. That night when they delivered the oven, they also told us that the pipes that brought gas to it were not up to code and they could not install it.

the cost of the oven itself.  Alex summed it up pretty well when he said to me the other day, “Well, I guess I’ll have to be an aerospace engineer when I grow up after all. You people won’t have any money at all saved for retirement. I need a job that makes enough to support us all!”

Did I mention that I think the cat’s sick and we probably still have that bill coming up.

For crying out loud! I’m almost afraid to make any sudden movements now, for fear of breaking something, flooding something, making something sick. We thought about stopping by Starbucks for coffee while the kids were in youth group tonight, but then we realized that we do not have even close to enough money to pay for that coffee, so we just came home.

Let’s just hope the old proverb “It’s always darkest before the dawn” is true, too!